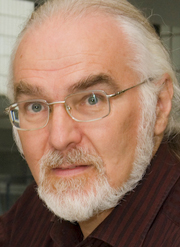 Michael Hadfield was born in the UK. From the time he discovered public libraries at the age of 11 there has hardly been a day when he did not have a book being read and at least one other waiting in line. He currently has 12 books out on his library ticket, another three being read to review for Amazon, and a pile of eight that were recently given to him. He is also a member of a reading group at the local library. In fact there have been occasions when he has been spending so much time in the library that he has been mistaken for a member of staff.

It is safe to assume that Michael enjoys a good book.

Michael's writing started after a nervous breakdown, caused by stress, ended life as a senior programmer/analyst. This was when Michael put his gardening expertise to work by writing articles for a national gardening magazine - Organic Gardening. He became a regular contributor to this magazine for over 5 years.

After training as a hypnotherapist and getting involved in the organisation of Paranormal Week (a week of presentations and workshops based around the paranormal) at Halton Lea library, Michael became fascinated with the power of the mind and how it could influence both internal and external reality. That, and a disillusion with the integrity and ethics of Western Medicine, led to the writing of this book and his earlier one Chakra Balancing.